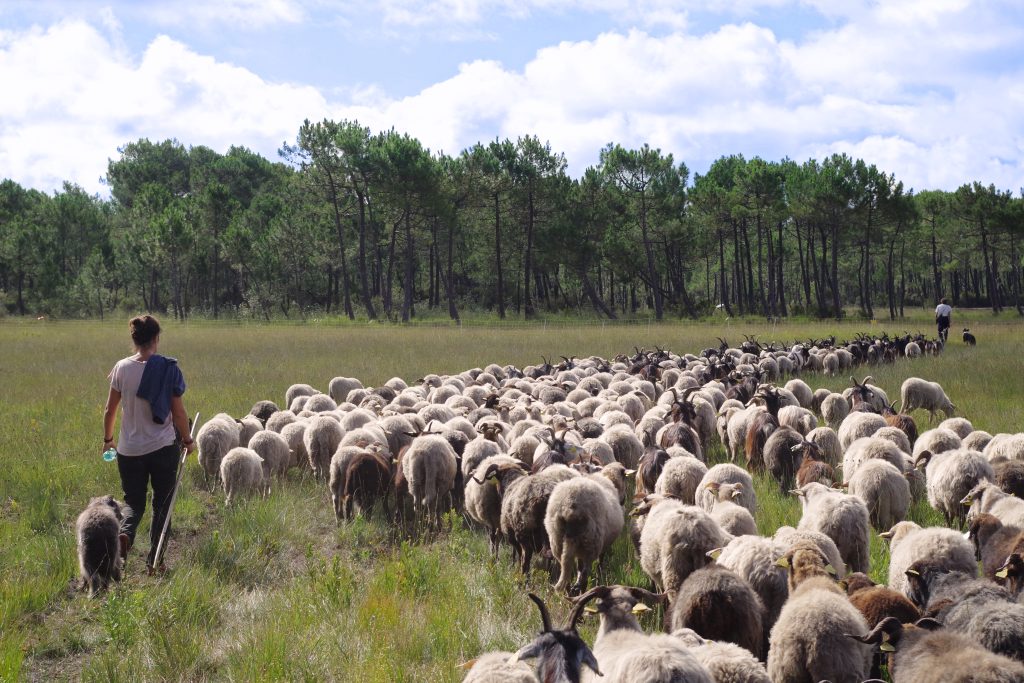 In June 2019, during Aquitanima – the annual event showcasing livestock and other domestic animals of the Nouvelle-Aquitaine region of France – the launch was held of a beautifully illustrated new book.

Supported by Ceva (whose headquarters are located in the region) and the  Regional Council of Nouvelle-Aquitaine, and published by the Conservatoire des Races d’Aquitaine, ‘Races en Héritage’ [Heritage breeds: animal agrobiodiversity of the Nouvelle-Aquitaine region] celebrates the diversity, beauty and utility of the distinctive breeds of livestock and other domestic animals that originated and can still be found in the largest region of France.

The book includes 60 local breeds from Nouvelle-Aquitaine, one of the richest regions in Europe for animal biodiversity. The breeds include 14 types of cattle plus horses, donkeys, sheep, goats, pigs, dogs, rabbits, geese, ducks, pigeons, chickens, turkeys and even bees. Breeds featured include well-known ones, such as the Pyrenean Mountain dog, as well as less familiar ones, such as the Pyrenean donkey, Sasi Ardi sheep and Béarnese cattle.

Earlier, in February 2019, the United Nations Food and Agriculture Organisation (FAO) published an alarming report – The Second Report on the State of the World’s Animal Genetic Resources for Food and Agriculture – that drew attention to the plight of the world’s agrobiodiversity. Agrobiodiversity includes all the plants and animals that provide the world with food, feed, fuel and fibre. Data compiled by FAO revealed that of the 7,745 recorded local breeds of livestock, more than a quarter were at risk of extinction. The report explains that, because livestock diversity facilitates the adaptation of production systems to future challenges and is a source of resilience in the face of greater climatic variability, the perilous status of many local breeds should be a cause of great global concern.

Meanwhile, at the book launch it was explained that many of the Aquitaine breeds featured came close to extinction. For example, until the 1930s, the Bordelaise breed of cattle was the main source of milk, cream and butter for Bordeaux. But by the 1960s, the breed was feared to have become extinct as farmers had replaced the traditional breed with more productive Friesian and Holstein cows. A few surviving cows were discovered in the 1980s, however, from which foundation the breed was rescued.

What saved the Bordelaise and the other breeds featured in the book, explained Alain Rousset, President of the Regional Council of Nouvelle-Aquitaine, was the passion of women and men – he said the book is a tribute to the people who fought to keep these breeds at a time when they were widely regarded as being unproductive, uncompetitive and unprofitable. For each breed, the book explains its origins, current status and the attributes and qualities it can contribute to agriculture in the future. In 1991, numbers of Bordelaise Cows was as low as just 9 in existence and just a whisper away from extinction.  Today there are over 200 Bordelaise cattle in France which, though still a small number, represents a significant recovery over the past 25 years.

Since 2012, Ceva has shown its support for the conservation of agrobiodiversity by supporting an annual prize for French famers. Co-founded in 2012 by the Fondation du Patrimoine and Ceva, under the patronage of the French Ministry for Agriculture and Food, the ‘Fondation du Patrimoine National Animal Agrobiodiversity Prize’ highlights rare French breeds that represent a unique genetic heritage. To date, around 20 livestock owners or breed associations have been recognized and rewarded through the award. In 2018, the second prize went to Christophe Guénon who breedsBordelaise cattle near the town of Léognan while in 2019, the winners selected by the jury bred the Bayeux pig, the Pyrenean goat and the Lapin-Chèvre rabbit, respectively.

Many of the breeds celebrated through the agrobiodiversity prize and in the new book are well-suited to less intensive, outdoor production and many can utilize less productive land. Many of the breeders also process their produce into added-value products which are locally valued. For example, Antony and Muriel Angée, who won first prize in 2019, rear their Bayeux pigs outdoors where they grow slowly, taking 18 months to reach slaughter weight – far longer than intensive, indoor systems. The result is high-quality firm, dense, marbled meat which is highly appreciated by local chefs and diners. The Angées also process their pork into a wide range of products including various types of traditional sausages, all made without any artificial additives.

It is our duty to support all forms of agriculture. While we need sustainable intensive agriculture to feed a growing population, traditional agriculture is also essential to preserve our planet’s biodiversity and conserve our genetic heritage. It is this genetic wealth that constitutes the most efficient protection of our ecosystem in the face of climate change and emerging diseases. In addition, these traditional forms of agriculture allow the preservation of our economic and social fabric and ultimately our cultural identity.