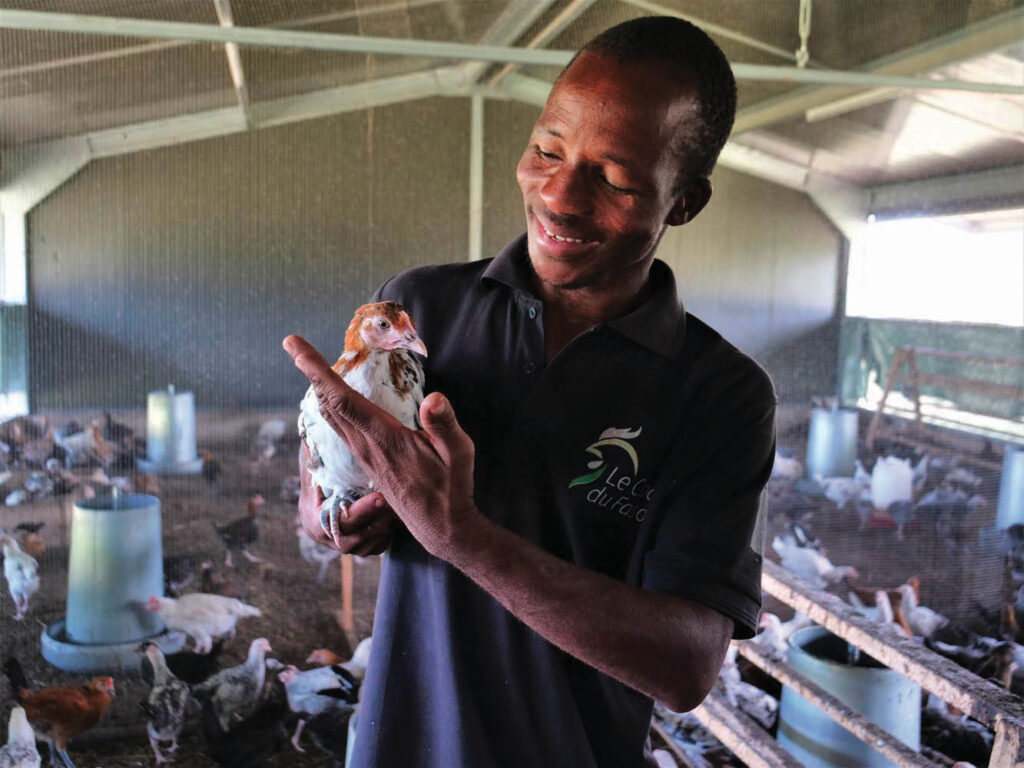 At the end of 2015, Ceva received a grant from the Bill & Melinda Gates Foundation
(BMGF) to manage a 5-year long initiative to support Burkina Faso’s traditional poultry sector.

Although the sector achieved very low productivity and was subjected to numerous risks and challenges, it also presented a real opportunity due to strong, growing demand for traditionally-reared chicken meat.

In Burkina Faso, more than 90% of poultry production takes place in extensive traditional
systems practicing free-ranging flock management. Local consumers are very proud of their traditional ‘poulet bicyclette’ that they believe has a better appearance, taste and texture than broilers of western-type genetics.

However, compared to improved breeds kept in more intensive systems, hens of local breeds reared in traditional farms produce only a few chicks per year and the growth rate is slow and mortality rate is high. As a result, there is a lack of access to day-old chicks for small-scale farmers.

The objective of the Poulet du Faso initiative was to improve the genetics and the control of the main infectious diseases of local chickens.

It aimed to achieve this while also:
1) involving traditional and emerging small-scale commercial farms
2) dealing with the lack of day-old chicks
3) limiting losses due to lack of vaccination and health management issues and
4) respecting consumers’ preference for ‘poulet bicyclette’.

To this end, the most appropriate approach was to cross local cocks with exotic hens and to adopt a segmented model for the rearing of the resulting crossbred birds, dubbed Poulet du Faso.

For this, local cockerels and hens are reared in a specially built facility, the Avian Selection Centre (the only one of its kind in Sub-Saharan Africa), where they receive top quality feed and health management in a fully biosecure environment. Rigorous records are kept to identify the most productive birds and prevent inbreeding. Within each generation, the best performing birds are selected and retained for breeding.
After the first generation, the centre has been run as a closed flock to avoid the risk of introducing infections and facilitate the selection work.

The elite cockerels – Coq du Faso – produced at the Selection Centre are then sold to breeding farms and hatcheries where they are crossbred with hens of a breed developed in France for the free-range meat market (SASSO SA51).

The chicks are then distributed to small-commercial farms able to provide the care and conditions the vulnerable young chicks need, which either rear the birds for the full production cycle or act as ‘mother-units’, selling the 42-day old ‘teen-chicks’ to traditional farmers who then rear them until they reach market weight.

Poulet du Faso attains a slaughter weight of 1.1 kg in 10-11 weeks, compared to 24 or more weeks for local birds under traditional management.

We believe that rural poultry production could have a big impact on household income, household nutrition, and empowerment of small-scale producers and specifically for women in Africa. Unfortunately, given the genetic, animal health, and input constraints, small scale producers realize very little net value from raising poultry. The approach CEVA followed in the Poulet de Faso stands as a clear example of how creative and innovative solutions can resolve such constraints.

The resulting chickens retain the appearance and eating qualities of local birds and are marketed under the Poulet du Faso brand, which has rapidly become known, trusted and sought after. The use of wing tags attached to Poulet du Faso teen-chicks and which feature the brand’s logo and a unique identifying number certify the origin. The tags are a guarantee to the farmers that the birds are genuine Poulet du Faso and have been effectively vaccinated at the hatchery.

From the outset, care was taken to ensure all stages of the Poulet du Faso’s production was undertaken using sound business principles. Also, steps were taken to ensure that opportunities created by the initiative were open to all local entrepreneurial small-scale famers by subsidizing the first batch of day-old chicks.

The original objective was to produce one million Poulet du Faso a year by the end of the project. At the end of 2021 (6 months after the project end), the annual production by the pioneering hatchery reached 1.5 million chicks per year and 2.3 million including the 3 newcomer hatcheries. The five hatcheries currently producing Poulet du Faso are anticipated to reach an annual production of 3.5 million birds by 2023.

The Poulet du Faso model has also attracted attention from entrepreneurs in neighbouring countries and similar initiatives are now underway in Togo, Senegal and Mali.

These initiatives will source elite cockerels from the avian selection centre in Burkina Faso.
Meanwhile, in Burkina Faso, the Poulet du Faso value chain now operates as an interconnected series of profitable businesses, entirely independent of the original program.

The delivery team identified four key factors which they believe contributed to the success
of the Poulet du Faso initiative.

These were to:
• adopt a business approach from the onset of the initiative
• secure the feed supply
• find cooperative business partners with complementary and shared objectives
• adopt an integrated and consistent marketing approach.

Transfer of skills, capacity and technology to local stakeholders has ensured sustainability of the model. However, the approach takes a long time to implement and establish: the donor-funded program phase of the Poulet du Faso initiative lasted more than five years.

The delivery team consider that the model can be replicated in other countries if they are able to comply with the key factors of success. Finally, adapting this model to the egg-layer industry could help fill the gap between production and consumption of eggs in Sub-Saharan Africa.

The Poulet du Faso is a success story built on People, Chickens and Skills. It is also the frontier between technological advances such as hatchery vaccination and genetic selection and organizing and developing local teams and competences to sustain a production chain adapted to local conditions.